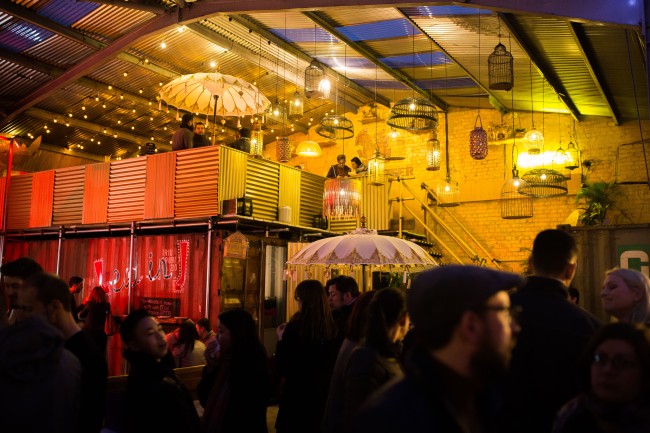 Singha Beer [pronounced ‘sing’], the original beer of Thailand, is proud to announce the opening of the Singha Street Bar at this year’s Street Feast, Dalston Yard, from 1 May – 26 September, bringing an authentic taste of Thailand to East London.

To celebrate, Andy Oliver, the head chef of London Fields based eatery, Som Saa, will be preparing complimentary tasty Thai “drinking snacks” to be served to visitors during the course of the opening weekend. The Thai nuts seasoned with kaffir lime, lemongrass, dry chilli and palm sugar will perfectly complement the crisp, rounded flavour of Singha beer being served at the bar. Andy has created a range of authentic Thai recipes to pair with Singha which will be available for people to take away on recipe cards at the Singha Street Bar.

Also, to mark the significance of the lucky number 9 in Thai culture, Singha is offering everyone who comes to buy a drink at the bar the chance to try their luck at Singha’s Lucky 9s game.  It’s simple; pick the lucky number 9 out of a deck of playing cards and the drinker will be able to enjoy a free bottle of Singha beer.

To celebrate further, Singha fans can also put themselves in the running for a chance to win a meal for two at Andy Oliver’s critically acclaimed Som Saa restaurant. To win, people simply need to post their best picture from the Singha Street Bar on Instagram or Twitter using #SinghaStreet.  There’s a meal for two people up for grabs each month.

The original Singha recipe was created by founder Boonrawd Sreshthaputra using a blend of sweet, earthy and spicy flavours to complement the spectrum of flavours in Thai cuisine. Ever since then, the brewers at BoonRawd have been committed to maintaining this vision for a quintessentially Thai beer.

Singha is steeped in Thai tradition, from its mythical lion logo to its white and gold label signifying purity and regality. Owned by the same family to this day, Singha has become part of the Land of Smiles’ heritage and pride over the last 80 years and remains the only beer to display the Royal Garuda, the national emblem of Thailand, on its bottleneck.