Film – See the new trailer for British thriller ‘The Intent’ 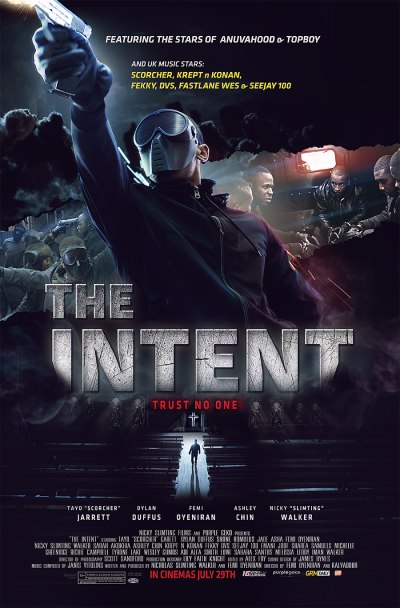 The gritty thriller The Intent, starring rising star Dylan Duffus and successful actor and grime artist Scorcher (Offender), will receive a UK theatrical release. The film, following an infamous gang living on the edge, was co-written and co-produced by filmmakers Femi Oyeniran and Nicky Slimting Walker.

Gunz is thrust into a world of excitement when he joins the TIC crew, led by the ruthless Hoodz. In no time, the crew goes from low-level weed peddling to full on armed robberies, with their newfound infamy affording them a life of guns, drugs and girls.  However, soon enough, they catch the attention of the police and a rival gang, and to make matters worse, are infiltrated by an undercover police officer whose intentions are questionable.

Co-director Femi Oyeniran, known for starring in Kidulthood and Anuvahood, co-wrote The Intent with Nicky Slimting Walker, with whom he previously collaborated on feature film It’s a Lot. With a soundtrack featuring some of the hottest up and coming UK talent, The Intent will simultaneously receive both a theatrical and home entertainment release.

The Intent is released in UK cinemas, on VOD and DVD on July 29th.