Posted by Editor on November 8, 2017 in 5 Star Rating, London Eateries | Leave a comment 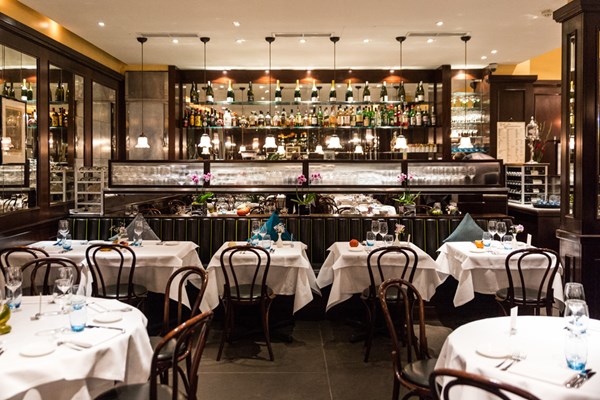 Like most people, one of my favourite pastimes is eating out. But in my opinion, just good food doesn’t cut it. A story should unfold through attentive wait staff and ambience. There is nothing worse than an unoriginal, cliched French Bistro but thankfully at Galvin Bistro de Luxe you will find yourself swept up in all the wonderful pleasures and delights of dining out.

Just minutes from  Baker Street station in Central London you’ll find Galvin Bistro a nice retreat from the hustle and bustle of everyday life. Once we arrived, the first thing I noticed was how much Gavin’s looks like a quintessential French bistro with warm rich dark woods that flank the entire place, crisp white table clothes and mirrored accents.

We were first greeted by our lovely hostess and immediately seen to our table, with none of that horrible wait time that one has to endure even with reservations. We had been seated at a lovely corner table when Rudi Hygino introduced himself to us as our host. He talked to us in great detail about the dinner menu with knowledge, but he had such passion for the food also. For starters, I had the Jerusalem Artichoke Veloute, with wild mushroom croutons. Which Rudi paired with champagne.

The soup was creamy and was beautifully hinted with artichokes, the croutons added a pleasant texture to the Veloute. My companion had the Escargot, in traditional garlic butter which also was paired with champagne.

For the main course, I opted for the Cornish lemon sole, jus Parisienne, brown shrimp, and croutons. It was a delicate fish with a fragrant lemon jus and the brown shrimp added a nice hint of depth and salt. The croutons were small and soaked up the jus so nicely but still gave another layer of texture to the mouth. Once again our lovely host paired my fish with an Italian Pinot Grigio that was delicate enough to allow the food to be showcased well.

My companion chose the very classically French Caramelized Duck confit, Cassoulet a la Maison. Though it’s a provincial dish they still managed to make it complex and nuanced, with tender duck meat that fell off the bone. Rudi once again paired the wine which he chose to be a subtle Bordeaux that had enough body but would still allow the meal to shine through.

Now for dessert, Rudi asked us to allow him to finish off our meal with his choice. He wanted to surprise us and he did in a grand way. For my dessert, he chose the Poire belle Helene and my companion had the Apple Tarte Taine and Normandy creme fraiche. The Apple Tarte Tatin was definitely more classically provincial to match his meal, but more elevated than the traditional version. But for my dessert, it was a bit more dramatic. On the menu, they describe it as a chocolate sphere with Manjari dark chocolate mousse, poached pear, Tonka bean ice cream and hot chocolate caramel sauce. Even though both desserts were well suited, I have to say my dessert was art. The dessert was brought to me and once the sauce was poured on top, the sphere slowly melts away and reveals all the delicacies within.

I highly recommend this restaurant for anyone who wants to revisit a classically French bistro but doesn’t have the time or inclination to go to France.