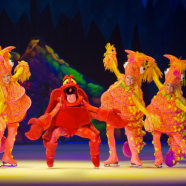 On 17th April, just before the much-awaited bank holiday I was lucky enough to get invited to watch Disney on Ice World’s of Fanatsy at the Wembley Arena, along side actress Kierston Wareing, Honeyz singer Celena Cherry, Peter Andre, Emma Bunton and others.

What a show! Disney is often associated with young kids – and although the little ones were in abundance at the show – I can honestly say I fully enjoyed it…probably more than some of the children! The first act started off with the Disney show Cars, then moved on to one of my favourite Disney films Little Mermaid. The whole ensemble was fantastic, and I couldn’t help but sing (and dance) along to ‘Under the Sea’ and ‘Kiss the girl’. The second act was just as delightful (if not more) with their rendition of Toy Story 3; the costumes were mind blowing! I couldn’t help but get excited as each character came out in their very ‘real’ costumes! Above all, I can’t help but mention the ice skating talent! The performers were absolutely amazing and made it all look so easy! I started to consider a career in ice-skating as I was watching…but I think I’ll stick to PR for now!

The show was lovely and I really enjoyed myself! No matter what age you are, I would recommend you go watch a Disney on Ice show, if you get the chance…and allow the ‘little kid’ in you to come out for a few hours!

← Never wonder which key is which ever again! Label-Label key caps review. Tantalise your taste buds at Carom Indian restaurant in Soho, London →