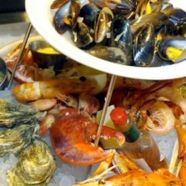 Posted by Editor on November 27, 2014 in Christmas, Food, Restaurants | Leave a comment

Christmas season is well and truly upon us and what better way to numb our minds from the thoughts of battling through Christmas shopping lines, than prosecco tasting at the wonderful Loch Fyne Seafood and Grill, followed by a sampling of their Christmas menu.

Having eaten at a few Loch Fyne Seafood and Grill restaurants before, I knew the cuisine and what kind of hospitality to expect. I was admittedly quite interested in their interpretation of Christmas. Fish is usually seen as the pre cursor to the main event, but not you’re average choice for the accompaniment to the traditional sprouts and stuffing.

The City branch of Loch Fyne Seafood and Grill is situated in Leadenhall market, a really magical part of town at this time of year. We were greeted on arrival by the prosecco sommelier for the evening, who was going to guide us through our journey into the depths of this popular Italian drink. He informed us we’d be trying three Prosecco’s and a Champagne, so we could gauge the difference between the varieties. It was interesting to learn that the name Prosecco like Champagne, refers to the area not the grape (which is in fact the Glera grape and blends). After the fun and informative briefing about the history and origins of Prosecco, it was on to the tastings.

The Prosecco was supplied by Follador 1769, who have been producing wines and Prosecco’s from 1769 and are a very traditional company, with a great history in production.   We learned that the hillier the area where the grape is grown, the better the Prosecco. The Rose we tasted first was a Glera and moscato blend, it was perfectly smooth, very drinkable and not too sweet. Next was the extra dry, which wasn’t the driest we were told, that was the Brut, which is made out of 100% Glara. The difference was palatable and again a smooth, dangerously drinkable drink!

The next tasting was what our host deemed as the King of the Prosecco, costing as much as a lower end bottle of Champagne, but with the same distinctive flowery taste of champagne. All in all a perfect start and introduction to the Christmas menu – lovely.  Now we were sincerely needing food before the bubbles took over too much, so we moved onto the Christmas Menu.

For the main, I chose the mussels, a Loch Fyne staple that never lets you down and again they were bang on the buck! They were plump, fresh, with a velvety sauce and lashings of it – lovely. My companion went for the waiter’s recommendation of the fish tempura. Now, I usually steer clear of this as I’m permanently watching my waist and I’ve rarely seen good tempura outside of a Japanese restaurant. Sadly this time was one of those times too, the batter was too thick and the fish was overcooked. Perhaps stick to the more traditional dishes if you do decide to pay a visit for Yuletide.

I have had some amazing fish dishes at Loch Fyne, so I plumped for the Farmed Gilt-Head Bream Fillet with pak choi, fennel and new potatoes, along with chilli and coriander butter. My companion chose the 28 Day Aged Char-Grilled West Country Sirloin Steak with twice-cooked British chips, garlic mushrooms and peppercorn sauce.

To be honest, what we got was a mixed bag. The Bream looked amazing, but was slightly over cooked for my liking, however, the fennel and other accompaniments were gorgeous and the portion sizes were enormous! The steak was OK, but the chips were AMAZING, crisp and fluffy, as they should be. I think if we’d have instructed the chef more to our likings we could have been onto a winner. It is down to personal taste though and I think we were probably being too fussy! Saying that the portions were huge and perfectly in line with the Christmas spirit!

With full bellies we decided to forego dessert and waddle into the evening mist. All in all I’d definitely recommend paying the restaurant a visit and giving them a go, especially if you want something a little less predictable for your Christmas party lunch or dinner. I’ve had many perfectly brilliant meals at Loch Fyne eateries and despite the slightly average experience this time – I’ll undoubtedly be back. They’re the staple choice for fish and worth a visit and when you do, make sure you get stuck into their delicious Prosecco.