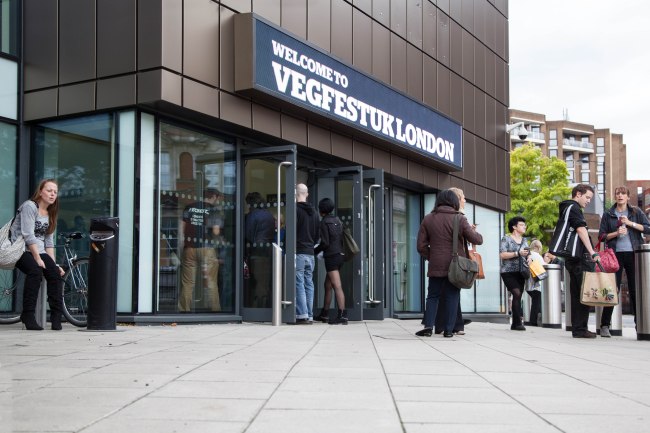 For those looking for vegan inspiration, products, information and socials on a top day out, look no further Europe’s keynote vegan festival VegfestUK London this autumn!

The event organisers added, “We’re absolutely thrilled to be given the opportunity to work at Olympia again, and in a brand-new hall this year. We thoroughly enjoy working with the lovely and professional team at the venue, and we thank them for their fantastic hospitality at our last 2 shows there. We had plenty of success at Olympia in 2013 and 2014 which has undoubtedly enhanced our profile massively ever since.”

Other eagerly anticipated new features of the show include:

– a Vegan Health Summit on the Saturday featuring a number of world-renowned health professionals,

– a Vegan Activists Summit on the Sunday with leading activists speaking about their vegan outreach work,

– and Vegan Activists Workshops with interactive workshops on educating more minds on the vegan lifestyle.

These activities dovetail nicely with the seasoned combination of a LifeWell Hub of presentations on holistic wellbeing, talks, cookery demos, a Cinema, Live Music and Comedy, Kids Cookery Classes, Kids Entertainment, on top of over 200 Stalls and 14 other Specialist Caterers serving exclusively Vegan food.

The VegfestUK London event website can be found at www.london.vegfest.co.uk, and advance tickets will be on sale from June onwards with Buy One Get One Free offers available for a limited period.

For the latest vegan news around the globe, refreshed 24-7, visit VegfestUK’s other website the Vegfest Express at www.vegfestexpress.co.uk

VegfestUK London welcomes on board its first sponsors: Lifefood, Moo Free Chocolates, Suma Wholefoods, Yaoh, Excellart and Out of Hand, with more tbc.