Turntable is the latest kid on the city nightlife block to wet our appetites for a good quality night out.  It’s a bar, restaurant and club space on the City fringes, that aims to offers something fresh and different as the working day closes and night time begins.  It sells itself as “a new restaurant concept” fusing South Asian street food with “an ambience of electric soul, Motown funk, Old School hip hop and RnB music.”  From our experience there is a lot on offer, and although the bar/restaurant/club is very much still in the phase of establishing itself, it feels like it’s already well on its way to becoming a successful night time destination. With the Christmas season approaching, Turntable looks well placed to assert itself in the marketplace for a one stop destination for a good night out!

On arrival at venue we were warmly welcomed by the lovely front of house, and promptly sashayed past the burley bouncer to take seats at the bar.  We were immediately joined by Graham, one of the owners, who quickly made us feel welcome by presenting us with a delicious cocktail.  The bar itself is a nice space – relatively intimate and well dressed.  There were a few of the city crowd already in there getting an early start to the night on one of the many cocktails on offer.  The cocktail menu here is relatively short but quite eclectic and well thought through.  Finishing our drinks quickly we asked the barman to surprise us with our next cocktail, and that he did, with some wonderfully drinkable sours. Very moreish, they definitely hit the spot!

Graham soon showed us to our seats downstairs in the restaurant come club. There was a birthday party happening down there, and already some fancy footwork was being displayed on the dance floor.  It was a nice touch to be looked after by the owner and it definitely made us feel like the personal care was there, which in truth is lacking in so many other city venues.  The whole environment felt super friendly, and the staff already felt like the club’s family, despite it only being open a few months.

In terms of the food, the menu is South East Asian based, and being half South East Asian I was ready to see if the Chef could put his money where his mouth was… and to be honest, indeed he could.  We feasted on beef rending that was just delicious, light and fluffy spring rolls and crab fried rice amongst many other tasty offerings.  All of which were deeply flavoursome, beautifully presented and not too oily.  In truth, for us, the food was definitely the star of the show so far, it is is literally out of this world!  The feast was all accompanied by the deliciously full house red.  It’s fair to say that we were happily full, and ready for whatever the night was to bring!

The dance floor area certainly carries through the Motown and 80s feel, with the Dj overlooking the dance floor pumping out the soulful music and grooves.  There’s plenty of space to dance and Graham mentioned that later in the evening even more space is available when dining tables and chairs are removed so that more people can get down and boogie.  There also some incredible modern artwork on the wall – reflecting the musical theme of the venue and adding to the vibe and energy of it all. 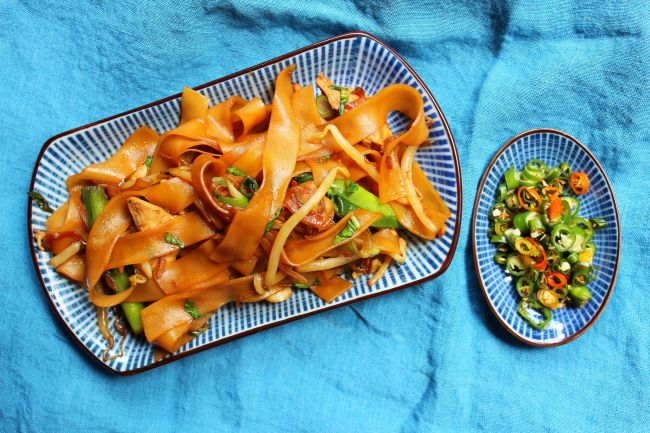 I feel that although Turntable may have a little way to go to establish itself and find its identity in the cut throat city social scene it seems already well on its way.  Turntable is perfectly setting itself up to become both an underground hit with the locals, and popular with out of towners alike due to the care and effort that they’re clearly investing to make it work. They’re already hosting a number of big events such as the National Reality TV after party and the National Luxury Awards, so it looks like big things are really happening here.  They also have weekly club nights planned from Thursday to Saturday, so there is always literally something for everyone, be it music, food, drink or dance!  Just make sure that you try the food before you hit the dance floor, as for me that’s the true star of the show.