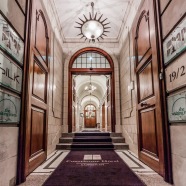 The Courthouse Hotel, formerly the Great Marlborough Street Magistrates Court, is celebrating 10 years as one of Central London’s most reputable and iconic hotels with rooms for just £10!

Built on a formidable reputation for comfort and elegance, the hotel is a staple of the rich history of the city; formerly hosting the trials of characters such as Mick Jagger, John Lennon and John Lydon. It now stands as the last word in opulence for hospitality in the capital, with 116 rooms, from the Classics, to the Magistrate Suites and the legendary 2 bedroom Lalique Penthouse Suite.

Now, to celebrate a decade of excellence, The Courthouse Hotel is offering one-night stays starting from £10 for the period of December 20th – 26th 2015 inclusive, for all bookings made on Black Friday (November 27th), between the hours of 10:10am to 10:10pm (subject to availability).

For those who miss the window, the hotel is also offering an exceptional 10% discount off of their room rates with the use of a promotional code, 10YEARS, valid from November 27th to 2nd January 2016.

The perfect Christmas gift also comes in the form of their irresistible festive packages, including a two-night stay and a sumptuous seasonal feast With ten years seeing The Courthouse Hotel providing nothing less than an unforgettable experience, it’s beautiful settings remain a bastion of London’s past, present and future.

← LONDON EVENTS – How The Grind Stole Christmas LONDON EATERIES – Hush Mayfair will be giving away free Espresso Martini’s to give an energy boost to all shoppers this Black Friday! →