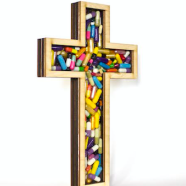 Catawiki, Europe’s fastest growing online auction house is bringing some of the most exciting British names in the contemporary art world to The Cob Gallery in Camden, London. The exhibition, which will run from the 22nd – 24th January 2016, will feature artwork from five different artists and the works on display will simultaneously be available for bidding online at Catawiki.

On show will be the latest works from the controversial artist Hayden Kays, whose works have found him a celebrity following, including Coldplay front man Chris Martin and One Direction’s Harry Styles, who previously spent over £20,000 on Kays’ artwork. Straddling an impossible boundary between street art and traditional visual culture, Kays’ work often draws from popular culture and art history, featuring acerbic word play and deadpan humour.

Notorious street artist Imbue, who has been dubbed ‘The Banksy of Brighton’ by The Independent, will also be showcasing a selection his latest works. A rising star in the world of street art, he’s renowned for giving a new twist to brands such as Disney, contorting the characters and logos ingrained in our psyche.

Established contemporary artist, Matt Lambert will be bringing some of his most famous works under the digital hammer for the first time. Inspired by a variety of sources including celebrity magazine, childhood memories, evolution, cultural symbols, belief systems and the developing world, visitors to the exhibition can expect to be challenged by his thought-provoking pieces.

Also exhibiting across three-days are works from Zoe Moss, a photo-realist oil painter, whose art is inspired by details and the concept of paint versus photography. Featuring alongside Moss will be fellow artist and illustrator Gemma Compton, who combines classic wildlife imagery with perfectly painted celebrities and a strong illustrative style, making her one of the most distinctive in a new generation of British painters.

The exhibition, which signals the launch of Catawiki’s contemporary art category in the UK, will see simultaneous auctions taking place across the Netherlands, France and Germany for the first time ever. All weekly auctions are curated by specialists in their field and anyone is welcome to buy and sell.

← DRINK – Struggling with ‘Dry January’? Try a protein-packed mocktail instead ESCAPE LONDON – The Fox and Goat in Oxfordshire, a cute country pub, rich with history →