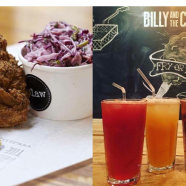 Posted by Editor on April 15, 2016 in London Eateries, London Events | Leave a comment

What: Music is a passion of the boys’ at Billy and the Chicks, and their place in St Anne’s Court Soho, is as much about the music as the food. With ever changing playlists and DJs in a booth playing a mix of tunes, the boys have decided to launch a dedicated Wednesday Hip Hop RnB night at Billy’s called, Chicken ‘n’ Beer.

Why: The DJs are mates of the Billy’s boys, and the music from old school classics to modern day bangers are curated by Southern Hospitality’s co-founder DJ Rob Pursey (from Hip Hop Karaoke) with guest DJs including Janeen Beanz and DJ Chux among others.  Music kicks off at 6pm, or get there between 4-6pm to enjoy Billy’s own happy hour. All sets are played live on Soho Radio too, so if you can’t be there listen in at www.sohoradiolondon.com.

When: Every Wednesday night from 6pm, £2 red Stripe, 2 for 1 Retro Cocktails from 4-6pm alongside the Billy’s menu (Sides from £3, Burgers from £7.50) which includes fried chicken, burgers, riblettes, coleslaw, mac n cheese and pickles. Also available are their 90s inspired cocktails (£7) including; retro Guilt, alcoholic lilt, an alcoholic Dr. Pepper and Cherry Up and Banana Cream Soda. Here’s the menu if you’re intrigued www.billyandthechicks.com/menu