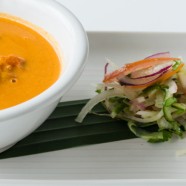 London is bombarded with Italian bistros, Thai take-ways, and so much of the same that I have been rendered into a korma coma! I love to eat out, and I love to try new things. I especially like tapas because you get to titillate your taste buds with a variety of morsels. But I always try new places without a distorted subjective opinion, but with a willingly open and receptive palette.  So, after a quick walk from Waterloo station I, accompanied by my other half, venture into Assado, which is connected to the Hampton Hilton Hotel. The entrance is impressive with lots of interesting mosaic tiles and open spaces. The colour scheme with its light blue floors and brown leather chairs is an amazingly soothing and calming colour ensemble. We are eagerly greeted by a very casually dressed waiter, in a t-shirt and dark jeans, a definite departure from the stoic Harvey Nichols all-black attired shop assistant, which more pretentious restaurant staff have become a casualty of.   We are then escorted to a raised booth, which I really appreciate. It not only provides us with a view over the restaurant, but also a welcome sense of privacy. Much better than those communal tables I’ve been subjected to in certain other restaurants. I can now relax and enjoy my surroundings whilst eagerly awaiting the impending menu.

Now in their eagerness to please the staff presented the food menu without consulting me if I would like a drink, but I will over look trivial details. When presented with very eclectic selection of starters I was really pretty clueless about what to choose. The interesting thing was that at this point I still did not know the origins of this restaurant; the other half wasn’t so ignorant. Taking the waitress’s advice, we decided to start with the chef’s platter; a selection of their most popular starters. And I have to say I was NOT disappointed.   It was presented on a wooden platter with scrumptious samples; my favourite being the beef croquettes.   The other half was blown away by the chick pea xacutti. And then it dawned on me what this restaurant was all about. It was a marvellous fusion of Portuguese and Indian cuisine.

The wine I chose was suited the food perfectly. If your preference is a light fruity wine, then you cannot go wrong with the Tavedo White. If you prefer a more full-bodied wine, then the House Red will more than suffice.

Though I may not be able to advise on wine, my taste buds are indubitably proficient. I had half a roast chicken, covered in a soya, ginger, rosemary and honey marinade – an utter taste bud extravaganza! You have rarely seen half a chicken devoured with such gusto. The other half opted for the lamb xacutti –probably the most complex of Goan curries and containing 21 ingredients. It exceeded expectations. Combining all those ingredients in a flavoursome whole takes skill and experience, and thus the dinner’s taste buds are transported on an astonishing culinary adventure.

But despite these delectable dishes, it was dessert that surprised most. I had to have two puddings; Bebinca – a Goan-style pancake made with a coconut milk based batter and flavoured with nutmeg, followed by the saffron crème brûlée. Now I once posted on Facebook, after a week of al la carte restaurants, that “one is bored of crème brûlée”. This, however, is one crème brûlée from whose velvety texture I could never tire from. The other half, after much deliberation, settled on the honey and saffron kulfi – a perfect ending to a flavoursome evening.

Verdict. It’s simple, I like the location and the the food speaks for itself. Assado’s celebrated Parsee chef, Cyrus Todwala, has taken the mundane and familiar, and has spectacularly transformed it into a culinary revelation! So, if you are tired of Thai, in a coma from korma, or indifferent to Italian, then here is your curative cuisine; Assado! Vamos Vamos Vamos!