Posted by Editor on August 4, 2015 in London Eateries | Leave a comment

I’ve had many a night out under the Vauxhall arches in my time in London swishing from bar to club at the witching hours of the weekend – but never have I thought of it as a destination for a culinary and cocktail venue. When I heard of Counter opening up and bringing with it some NYC sass and style I was first in line to check it out.

Housed in a large railway arch and part of the Europe’s largest urban regeneration around Vauxhall and surrounding areas, Counter is an early contender to establish itself as a go to place for an eclectic mix of food, water and entertainment in the area. It holds the title as London’s longest restaurant being housed in a 200 ft long arch tucked in right next to Vauxhall station. Time Out has called COUNTER “… best thing that’s happened to Vauxhall – perhaps ever.” And from my experience despite the rowdy nights I’ve had they’re, for me they’re not wrong. It brings something to the area that has previously been missing and a feeling of a communal place of all forms of life experience that I think most areas are crying out for.

Counter is an early contender to establish itself as a go to place for an eclectic mix of food, water and entertainment in the area.

A step inside reveals a very industrial, very now space with exposed interiors and gunmetal grey set off by a neon orange and some modern but traditional touches – very contemporary, very now and very relaxing. Kind of industrial meets French brassiere. The long well dressed bar and dining counter stretching down the left side of the restaurant from the restaurant to the BackCOUNTER which has been inspired by New York’s vibrant, edgy and slightly naughty Hell’s Kitchen district… And for anyone who’s ever been to Hells Kitchen this claim makes it definitely a place to check out. BackCOUNTER is open from Thursday to Sunday and boasts a heap of special events that have already taken place there despite it not being open for long.

However, I was here to have a look a the food and drink offerings so enough of this, let’s get down to business. We were allocated a table facing the bar – it was a booth for around four people which provided the right amount of privacy we wanted without making us feel detached from the room. It was also busy, but not imposing at that time which was around 7pm. We were shortly presented with a eclectic cocktail menu which notably was presented in a beautiful faux leather bound burnt sienna blistered menu cover, very classy, which had some twists on old favourites on there. We promptly ordered I had a Vauxhall Vespa and my lucky guest a COUNTER Margarita – both of which were well presented and tasted very alcoholic and very good! 2 definite TICKs, they know how to design and mix a good cocktail! 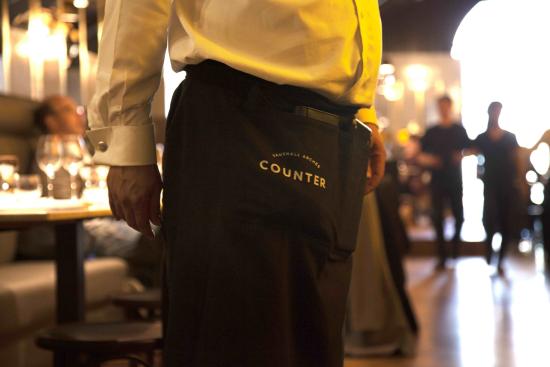 So to the food again presented in that gorgeous binding. I ordered scallops on scallops with fennel puree, tarragon and tangerine, my guest buttermilk fried rabbit, slaw and ranch dressing. Both I thought a real departure from something more traditional as was the menu throughout and a real commendation for pushing the envelope. When they arrived both top marks for presentation… However – sadly one of the pieces of rabbit was almost still hopping and we had to sadly send it back. It was however quickly replaced with a fresh plate and some apologetic snacks whilst we waited – the poor chef was mortified, I really felt for him but hey, these things happen. When it – re-arrived the coating was divine – deep smoky flavours and succulent rabbit. I did find the fennel and tarragon and fabulous accompaniment to the scallops but for me the tangerine was slightly too sweet . I thought with the scallops as being beautifully cooked as they were, they held a bit of sweetness themselves the tangerine sweetness could be relaxed a little to bring out some tang and compliment the sweet scallops. However I’m sure some people will adore it just as it is – just personal taste. So yes some great things about the starter, and some not so on point, and with interest and anticipation we embarked on our mains.

I had ordered the fillet steak with green beans and mushrooms and my guest, poached halibut, spiced coconut puree, red peppers and coriander… The steak was gorgeous – large, plum and cooked to perfection – ample beans and large and juicy mushroom -YUM. I did also order a tomato salad and the tomatoes were ripe, flavoursome – the dressing a tad sweet – but nothing to spoil my enjoyment. The halibut was also cooked gloriously and the sauce tasty. Both portions were well sized and the service was great!

We ordered dessert – well why not hey? We were so relaxed as it’s such a good space. I had the cheese board which was totally satisfying and my guest the Mississippi mud pie. He thought it wasn’t as moist as it could be, but he’s fussy at the best of times.

All in all COUNTER is a welcome addition to a great, fun area of town that’s currently undergoing a well deserved make over. I’d definitely return as it’s a communal friendly place to hang out and is doing some great things on it both its food and drinks menu – OK so a few teething problems but who cares. It’s classy, edgy, hip and happening – and brings so much to the area all wrapped up in one large venue space. All in all I’m inclined to agree with the Time Out review, so if you’re in the area make sure you head down the weekends especially sound fun. With its convenient position next to the station you’ve got no excuse!