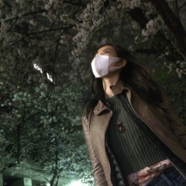 LIFESTYLE – Brit on the Boulevard

I love to check off major world events and happenings – award shows, festivals, cultural occasions.  Maybe it’s bragging rights, the accomplishment, the satisfaction of “been there done that” or equally just to see what all the fuss is about.  This Spring, the fuss was about blossom.

Companies shut down, thousands go on holidays, hotel prices soar during the Japanese Sakura, otherwise known as the Cherry Blossom festival.  A tough one to predict, since it relies on some rather volatile trees blooming, best bets favour the first week of April, so we boarded an extremely comfortable Singapore Airlines flight to Tokyo for some pastel pink action, amidst anticipation of a complete sensory onslaught – culture, taste, scenery, activity and some downright crazy.  The Land of the Rising Sun didn’t disappoint.

High priced, tiny room, short sleep later, we were up before dawn break rushing to Tsukiji Fish Market, a Tokyo highlight that only allows a handful of tourists to watch the auction. Resounding advice was get there a couple hours early; our advice is two hours earlier than that. Missing the proverbial boat, we commiserated having breakfast sushi, fresher than Will Smith in a fridge.

We scaled the viewing tower of the TMG building with slight delay searching for the bathroom hand-dryers (apparently Japanese all carry their own towel) to decide upon our optimum Cherry Blossom experience from birds-eye views.  The blue picnic mats pointed us to Shinjuku Gyoen National Garden, so we loaded up on sweet and savory treats exquisitely presented from amazing department store Takashimaya, and strolled around the busy park, surgical masks donned to ward off the pollen (and because when in Rome, right?) marveling at the sheer concentration of bare trees hosting varying shades of pink blossom, creating a stunning visual across the impeccably manicured gardens.

Traditional graceful highlight achieved, our evening took a turn to the modern and rambunctious,  snaking our way through Shinjuku’s yakitori-filled Memory Lane (or Piss Alley depending on who you ask) to the Robot Restaurant, a lucid entertainment affair which I can only describe as what would happen if Las Vegas ate Rainbow Brite whilst making love to Daft Punk on a carnival float.

With memories fresh of Robot boxing and Anime drumming, we boarded an equally futuristic bullet train, bento box in lap, north to the quiet ski town of Nozawaonsen, named and known for its multiple Onsen (hot springs) that serve as a scalding naked relaxation for locals after a great day on the slopes. We even indulged in the practice of boiling your own egg whilst soaking your feet in one, before retiring early in matching Yukatas following a multi-course dinner at Kiriya Ryokan, a traditional Japanese B&B that will have you feeling proper Karate Kid. 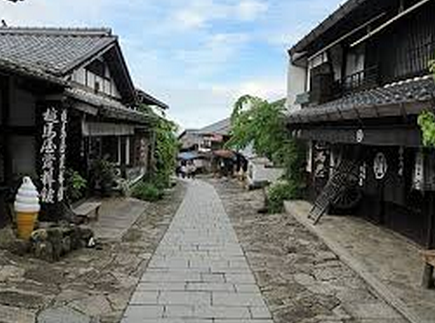 We journeyed east to the ancient post town of Magome, sending luggage ahead and walking the trail of stone paths and hiking trails through picturesque Kiso Valley to Tsumago-juku, where a scrumptious outdoor BBQ awaited, prepared by grillmaster “Funny Face” at another elegant ryokan “Fuki no Mori” (its name, not a house rule).  A dip in the on-site onsen and big breakfast later, we were off once more to Kyoto, one of my favourite stays of whistlestop Japan.  Kyoto has the feel of a very well planned city, easy to navigate and surrounded by lush nature.  We had the chef’s choice of Kobe at subtle but upscale Haafu Honten – simply excellent – before cycling through Arashiyama taking in UNESCO temples, hanging with monkeys atop the mountain, running through the towering bamboo forest before rushing to scale ten thousand steps through the famed red gates of the Inari Shrine.  Our little evening energy left dragged us round the geisha district of Gion, popping into exclusive intimate eateries, before a quick sleep, a superfast bullet train to a final day at Disney Tokyo Sea (where twinning seemed a big trend amongst Japanese teens), a formidable lunch at Bice against the backdrop of Tokyo’s skyline and Minjae Lee’s artwork, then dropped off our side of the Pacific back in LA.

I arrived just in time to welcome my business partners, actors Richard Cambridge and Jessica Rose who flew in from UK and Australia to launch our new business WeRehearse.com with a star-studded red carpet event on the famed Sunset Strip.  WeRehearse is video chat for actors, helping them to rehearse their scenes with anyone around the world, and it was thankfully very well-received by Hollywood’s talent and press.

Hot on its heels was the annual Britweek festival, for which I sit on the committee. We kicked off with a sci-fi themed launch at the British Consul-General’s residence complete with tardis entrance, and a private art showing of Turner’s work at the Getty, before Mary & I skipped off to New York for HuffPost Live host Caroline Modarressey-Tehrani’s gorgeous wedding featuring hands-down the most talented wedding singer ever.  New York was as busy and fun as it should be – strolls through Central Park and the Hi-line, foodie classics from Sarge’s Deli, The Meatball Shop, Lombardi’s Pizza and Junior’s cheesecake, immersive live theater in the bizarrely interesting and carefully choreographed Sleep No More, and a private immersive virtual reality viewing of Lost, a short film made for Oculus Rift at TriBeCa Film Fest.  In the city that never sleeps, we were able to recharge perfectly with stays at the excellently located and hospitable Élysée and Casablanca Hotels, both offering classically designed spacious rooms in unique comfortable style, including a much-enjoyed wine and cheese happy hour for guests.

We made it back to catch the tail end of Britweek to see WeRehearse’s Jessica speak on the Growing Your Startup panel for DigitalLA and the Film & TV Summit featuring a thought-provoking keynote by Sir Ken Robinson.

May found us at the launch of trendy denim brand Artistix, and Neil Diamond’s concert at the Hollywood Bowl, a parting gift for one of our Face Forward charity patients Hanifa who just completed surgery reconstructing her face after an acid-attack. She had a great time, as we toasted her new MBA scholarship – an inspiring woman, who welcomes no pity.

We sailed a sunrise ferry over to Catalina Island for my birthday, for silliness on golf carts and cocktails at beach clubs, then jumped on a quick plane to Utah, to the sprawling serenity of Victory Ranch to celebrate Chefdance founders Kenny & Mimi’s wedding anniversary with a fantastic weekend of yoga, mountain biking, fly-fishing, clay pigeon shooting and of course fine, fine food, friends and music in true Chefdance style.

We caught a few movies in the interim – Ex Machina, a subdued eerie thriller of the future; Spy (surprisingly good) and Tomorrowland (surprisingly cheesy), before attending the WeRehearse-sponsored launches of Real Housewife Lea Black’s book, and LA Fringe Treya’s Last Dance, a one-woman play of growing up in London’s ‘hood.

Mary’s birthday was up next, spawning a road trip north through gastro-goodness at Sides restaurant in Los Olivos, to a huge cake tasting at the fabulously kitsch Madonna Inn in San Luis Obispo, staying in one of the themed rooms and a morning after hike up Madonna Mountain, but not a material girl in sight.  She opted to further celebrate with friends at the gorgeous Griffith Park back in LA, with pot-luck food and kiddie party games.  I’m sure I won at Twister.

June gloom brought with it grey LA days, which were perfect for morning runs around Hollywood Lake and self-development podcasts, my current faves being StartUps, Smart Passive Income, Tai Lopez and Entrepreneur on Fire.  I saw a pre-screening of the shockingly gruesome and extremely up-close Cartel Land documentary about the war on Mexican drug gangs, and promoted our WeRehearse heart out amongst the other movers, shakers and startups at LA Tech Day.  We enjoyed way too much munch at The Autry’s Friday food-truck fest; an idyllic and relaxing weekend at British actor John Mawson’s Ojai Valley hideaway; and networked ourselves numb at Next Level Studios and The Workshop Guru’s performers party at Sassafras.

I tied a nice neat bow on the year’s halfway mark, recording my vocals as Clive for the new puppet-based horror “Abruptio” which Dread Central are calling “boldly original”, and remembering exactly why I’m pursuing a career in film watching the unfathomably perfect timeless classic Back To The Future.  For its 30 year anniversary, we were treated to a screening of this amazing movie, at the amazing outdoor venue the Hollywood Bowl, eating amazing fresh-packed picnics by gourmet Italian restaurant Bottega Louie (you have to try their macarons!)  The film was introduced by screenwriter Bob Gale, Christopher Lloyd and Lea Thompson, with the accompanied score played live by the LA Philharmonic – what an experience! I reflected back on the last three months of awesomeness, truly grateful, and I look forward to sharing more with you in the future.  Have a great summer.

← BEAUTY – The ultimate bath experience with Olverum Bath Oil LONDON EATERIES – Head to Mole in Marylebone for amazing Mexican food, with a twist! →