LIFESTYLE – Add a little pizzazz into your home with coloured raditors

Posted by Editor on September 18, 2015 in Lifestyle | Leave a comment 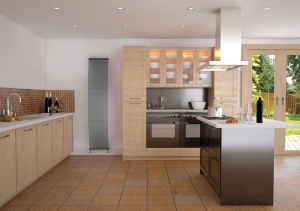 Even 10 years ago, a suggestion that a radiator could become a focal point of the décor in a home would have been met with a raised eyebrow. Designer radiators have been around for a long time but initially most were targeted at bathrooms and kitchens, tended to be chrome plated, and usually designed as towel rails.

Things have come a long way since then, with a myriad of designer radiators available for interior decorators and the more artistic homeowners to incorporate in their designs – even if some of those currently available have taken on a fantastical appearance that many would find too alarming to fit!

The proof of the pudding is in the eating and when supposedly staid radiator manufacturers unleash a range of high-quality, functional but exceptionally good looking designer radiators, alongside their traditional and still successful steel panel offerings, you know that a trend has become mainstream. For this to happen, the technology that makes radiators work so well – they still account for 90% of all wet heating systems in the UK – has to be highly effective.

Stelrad is a British name most associated with the ‘normal’ panel radiators found in the majority of homes. The maker of two million radiators a year has been at the forefront of the technical improvements in design and manufacture which has seen the performance levels of radiators soar.

Radiator technology has changed massively over the past 20 years. Those made before 2000 can be up to 50% less efficient than modern radiators, due to the increased surface area of newer radiators and the improved convection fins. Today’s radiators are more energy efficient because they heat up more quickly, due mainly to lower water content – typically around 24% less water than pre-2000 models. These advances mean that modern radiators, like the Radical range from Stelrad, can cut your home’s energy bills by 10.5%.

But perhaps the most eye-catching change in radiators has been the huge increase in colours available. To paraphrase the famous quip by Henry Ford, traditionally you could have radiators in “any colour so long as it was white”. Stelrad now offers many of its models in up to 35 colours.

The company’s Swing radiator is a good example. It is based on Stelrad’s popular Compact Vertex radiator but sees the addition of a one-piece, curved steel front cover that gives it a modern and aesthetically-pleasing designer feel.

It comes in white as standard but can be specially ordered in 35 colours, making it an attractive product for interior designers and architects who are looking to match radiator colours with specific colour décor. Or even for those looking to make a statement – with a vivid colour use that makes it leap out from its surroundings.

“Many of our products are now available in a huge range of colours, which is great news for people looking to turn their house into a stylish home,” says Stelrad’s Chris Harvey.

“From soft pastels to forceful sepias, greys, blacks and metallic, we offer colours to suit most tastes. And while there’s a short waiting time for most of them, it’s a wait worth building into your project to get exactly the right shades for your home. While variations of white will always be our best sellers, the increase in coloured radiators sales shows that style-conscious homeowners will always be on the lookout for something different.”

Swale Heating, the largest independently-owned heating installer in London and the South East, has teamed up with Stelrad to make its exciting range of radiators available as part of domestic heating system upgrades throughout the region. For more information about Stelrad and Swale Heating visit www.stelrad.com and www.swaleheating.com