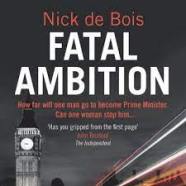 Posted by Editor on September 28, 2021 in Lifestyle | Leave a comment

As Chief of Staff to Dominic Raab and Secretary of State for Exiting the European Union, you’d be hard pushed to find someone who has emersed themselves in politics than he has – as he’s never shy to be vocal.

And for this former MP for Enfield North, championing changes in the laws of Knife Crime truly shows that Nick isn’t afraid of getting behind something he believes in.

So from the gossip and competition of the political world to the rising stars of the House of Commons, Nick took inspiration from his illustrious career to write his first book, Confessions of a Recovering MP.

Does anyone think it’s possible to cover up leadership challenge?

An unexplained suicide leads to the unravelling of a scandal that could dash the hopes of James Cleaver to become Prime Minister.

And that threatens the special interests of powerful people at the heart of the establishment who will stop at nothing to get their way.”

Watch three best friends, Tom, Scott and Beth with the closest of  bonds and all at the heart of those closest to power  – ‘The Troika’ – but each with secrets and incredible revelations.

Living in a time post-Brexit and post-pandemic, there are failed trade deals and dire economic problems with their own consequences. The Prime Minister is doomed and his days numbered as he seeks a return to “ever closer Union with the EU”

Who will succeed him and at what cost? It’s certain that James Cleaver’s ambitions have accelerated but will broadcaster Beth Anderson, be there to bring him down?

Who is prepared to sell their souls for more determination and power?

The future of the UK government is at the highest risk…

Absorb yourself in this story and be part of the backdrop for the greatest betrayal of the country.

← LIFESTYLE – BOOKS: Stand and Deliver – a life worth fighting for. LIFESTYLE – Time to meet your MATCH? →